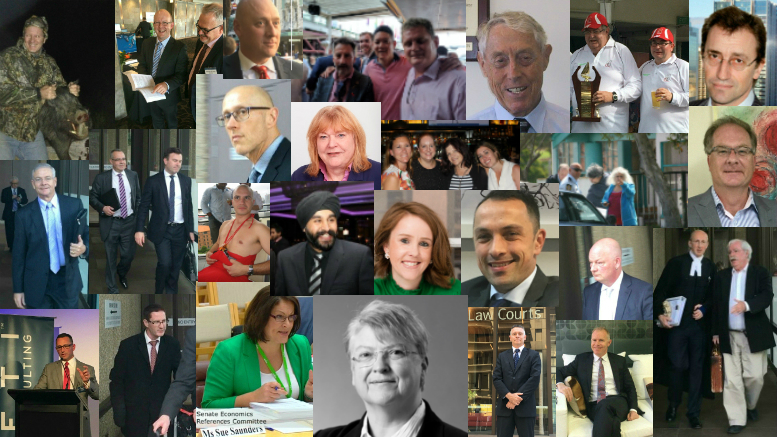 The year is done, Christmas is come and for SiN it is time to replenish the reservoir of curiosity ahead of what promises to be a fascinating 2018.

From next year the Insolvency Law Reform Act (ILRA) will be in full swing. Insolvency practitioners will face a world where creditors will have expanded powers. Appointees will need to get used to being replaced.

Courts too will have expanded powers in determining applications related to external administrations.

How much restraint will judges impose upon themselves in determining the extent of the new powers available to them under S 90-15 given the new law appears very broad. What might not an ambitious applicant achieve, aided and abetted by a judge keen to test the ILRA’s limits?

The new Safe Harbour provisions are also certain to be watched with interest wherever they are put into practice and if it turns out that they do complement the voluntary administration regime then it may well prove worthwhile.

But the jury on Safe Harbour and Ipso Facto is sure to sit for quite a while and looming over the new legislative changes is the funding model to be imposed by ASIC, around which confusion dances unhindered by reliable guidance.

For SiN, 2018 also means keeping tabs and updating SiN’s readers on the various ongoing matters we’ve brought to your attention throughout this year which we’re about to consign to the past.

Practitioner conduct matters; litigation between regulators and appointees; practitioners in dispute with each other, departures, consolidations and new beginnings.

In many ways 2018 will flower from the soil of its predecessor and in this, our final SiN Newsletter for 2017, we take the opportunity to wish you all a prosperous and Merry Christmas and a Happy New Year and finish by bringing you our chronology of the most SiNful highlights of 2017.

Allegations of a sophisticated, multi-million dollar GST rort in the gold refining sector and the pursuit by ASIC of now ex-liquidator Andrew Wily dominated SiN’s coverage in January 2017.

In: Breaking – ATO Sues Gold Refiner For $200 Million SiN exclusively revealed how the Deputy Commissioner of Taxation (DCoT) had launched Federal Court proceedings targeting the wealthy Cochineas family with a claim for $200 million which the DCoT alleged had been purposely concealed and withheld via a sophisticated GDT fraud. The case is ongoing.

Also in January, SiN reported that ASIC had launched a bid in the NSW Supreme Court for a judicial inquiry into the conduct of Andrew Wily and David Hurst as liquidators of various Crystal Carwash Cafe group companies. The legal action, first reported in: ASIC Asks Court To Ban Wily And Hurst    meandered through the year and a hearing is not expected until mid-2018.

The Commonwealth Department of Employment’s FEG Recovery Unit really showed its hand in February 2017, indicating it was neither friend or foe to the insolvency profession. What mattered was whether a claim for funds by FEG ranked higher in priority to any entitlement asserted by a liquidator or receiver. What was clear was that the answer would always be zealously pursued in the Government’s by FEG recovery czar Henry Carr, as outlined in: FEG Letters Spoiled Christmas For Some.

Another significant story we reported on in February revealed the dreadful risks attaching to an imperfect registration on the Personal Properties Securities Register (PPSR).

February was also the month a struck off liquidator learned that he would not have to serve a custodial sentence in a prison farm for nicking $90,000 from a receivership account to pay his tax bill, as chronicled in: Breaking: Struck Off Liquidator Avoids Gaol.

Of March’s ides we should beware? Certainly there was plenty happening as Autumn kicked off in 2017. In Liquidators Sue Each Other Over Failed Partnership SiN reported on an unedifying spat over a partnership agreement that failed to deliver to either party’s satisfaction.

The FEG recovery snowball also gathered momentum in March, as evidenced by:Delnote Constructions Receivers Sued By FEG and in Appeals Court Backs Black’s Idyllic Solution SiN reported on how the Court of Appeal had moderated the emerging, ad valorem threat to practitioner remuneration as traditionally calculated by the time-based costings.

March also saw some very senior and valued members of PPB Advisory’s (PPBA) team give effect to decisions to try their hand elsewhere with the departures catalogued in: PPB Loses Finance And Property Partners To EY and we continued our reportage of significant PPSR disputes in Forge Group’s Chapter 15 Petition Dismissed.

For a month truncated by the Easter Holiday April was nevertheless a busy one for SiN. As colourful insolvency identity Andrew Wily prepared to relinquish his liquidator’s registration ASIC intervened on Wily’s attempt to resign as a liquidator from 35 appointments, telling Wily’s replacements that as a consequence of Wily’s improper method of resigning, their appointments were invalid. No pressure? See the details at: ASIC Intervenes On Wily Resignations.

In Liquidator Calls In Administrators Over Tax Debt SiN reported on the liquidator forced to declare VA over his own accounting practice and in ASIC’s Brown Relinquishes Liquidator’s Ticket SiN revealed how ASIC’s liquidator cop Adrian Brown was preparing to make way – at least to a point – for a replacement.

In May 2017 the ramifications of the Queensland Supreme Court were generating serious concern. In Linc Energy Ltd (in Liq) [2017] QSC 53 (13 April 2017) the court ruled that ruled that liquidators from PPBA could not disclaim property polluted by Linc’s underground coal gassification project. But as SiN reported in Liquidators: Homes Safe From Enviro-Liability the lawyer largely responsible for persuading the court to reach its onerous conclusion then turned up at the Traill & Associates Annual Practical Insolvency Conference to assure liquidators their homes were safe.

May was also the month when SiN began to expose some of the connections between the insolvency profession and the architects of the $160 million Plutus Payroll fraud, as outlined in: Insolvency Referrer Charged In ATO Fraud Bust began to.

SiN’s May coverage also included reportage in: SAKR: Demand For Detail To Bedevil Future Fee Claims which outlined the painstaking fee approval process that had emerged in the wake of the Sakr Nominees remuneration decision.

For others May was a cause for celebration and none more so than KordaMentha’s Rahul Goyal and David Winterbottom as reported in Kordas Duo Retain Right To $2 Mill Success Fee.

June was crammed with SiN. Within 10 days of being appointed voluntary administrators of Ten Network Holdings KordaMentha was embroiled in controversy in relation to its DIRRI, as outlined in Korda’s TEN DIRRI A Gameshow Script. We also saw McGrathNicol close its Adelaide operation and Jirsch Sutherland founder Rod Sutherland give away the grind of being a bankruptcy trustee.

Such was the concern around KordaMentha’s handling of conflict issues that a special purpose administrator (SPA) was appointed to produce a report into the DIRRI and its supplementary equivalent, a development SiN detailed in Ferrier’s Gothard Appointed Ten SPA .

The windy month had plenty to recommend it. SiN reported on Moves Afoot To Propel Pre-Packs Onto Political Agenda; documented the departure of an EY heavy hitter in EY Loses Campbell-Wilson To Grant Thornton and reported on the woman hired to replace ASIC’s head of liquidator enforcement Adrian Brown in Ex-McGrathNicol Eszenyi ASIC’s New Liquidator Cop.

It was also the month KordaMentha sealed the deal on its momentous Arrium administration, which SiN canvassed in Parade To Cap Momentous Week For KordaMentha.

As the Insolvency Law Reform Act (ILRA) began to take effect commentary on its implementation began to seep out and not all was complimentary, as SiN found in Court Backs Hourly-Based Claim, Slams ILRA Transition.  September also brought us Veritas’s Thomson Facing $250,000 Costs Order, the cautionary tale of bankruptcy trustee whose handling of a litigation funding agreement backfired big time.

KordaMentha was again in SiN’s sights in TEN Creditors’ Report More Grist For PCC Mill and a major law firm defection garnered significant attention after SiN reported Norton Rose Departees Launch New Insolvency Firm. In September we also brought you the first instalment in what would develop into one of 2017’s major stories when we published the curious tale of Phoenix Buster Representing DCoT As Iannuzzi Ousted.

September also provided us with more grist for the mill in regards to the troubled Octaviar liquidation, as outlined in Octaviar Liquidators Still At Odds Despite KPMG Deal.

Octaviar was again prominent in SiN’s pages in October though it was litigation funder Patrick Coope who was the focus in: Lit Funder’s Conduct Allegedly Unconscionable: Octaviar. Propertionality in remuneration also forced its way into the collective insolvency consciousness, thanks to the conclusions of a judge which SiN detailed in: Proportionality Spectre Looms As BBY Fees Mount.

Major stories continued to mount in October. An issue with major implications for insolvency practitioners was ventilated in: Tax Boss Squares Off With Tinkler’s Liquidators and in: Liquidator Facing 10 Year Ban SiN revealed how the ATO and not ASIC was taking liquidators to task over allegedly toxic referral networks. The major stories kept coming though. In: Westpac In Grant Thornton’s Sights Over $200m Ponzi, SiN broker the news that one of the big four banks may have unwittingly facilitated Australia’s biggest illegal ponzi scheme.

The year seemed to reach a crescendo of SiN in November. We kept the Plutus Payroll scandal on the boil with Hall Chadwick Duo Liquidating Plutus Payroll Neighbour. We reported how Regal Funds Management was installing insolvency experience onto its board in Insolvency Veterans Replace Bankers At Hedge Fund.

In Trustees May Settle Over Bartercard Boss’s PIAs we revealed how millionaire Brian Hall had narrowly escaped being forced into bankruptcy; we also examined Australia’s oldest voluntary administration in Beechworth: Australia’s Longest Running VA?  and revealed that the DoE Sues McGrathNicol Foursome For $3 Million.

SiN’s coverage of the ATO’s ongoing investigation into questionable referral networks and the liquidators associated with them continued in December with further revelations in Same Referrers Tar Liquidators Marked For Termination and we continued to explore developments in Colourful Cast No Barrier To Embattled Liquidator.