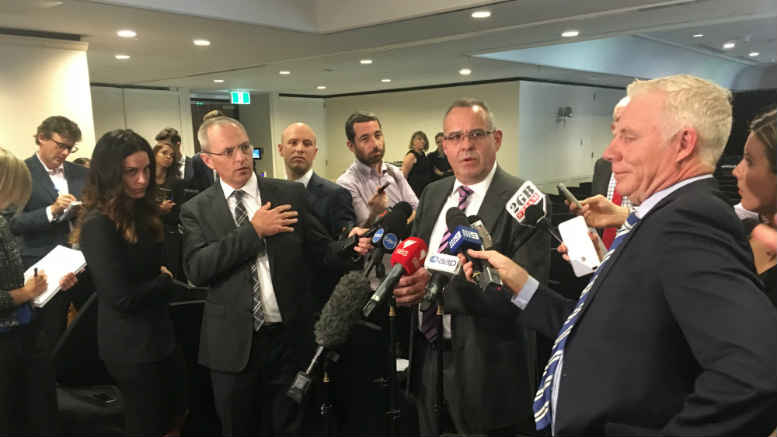 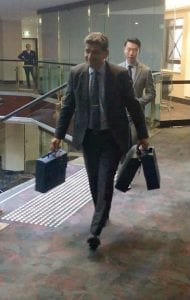 Kamran Beiglari of Link Market Services with the TEN votes.

What would Australia’s great bush bard make of the press pack mayhem outside and inside the Banjo Patterson room on Level three of Sydney’s Marriott Hotel yesterday?

Perhaps the great man might want a quiet word with Ten Network Holding’s administrator Mark Korda – a man known more for his numerical eloquence – and ask him how a bloody accountant can have cameramen and women, radio reporters and press hounds tripping over their tripods, knocking over chairs and scrambling back and forth so as to chronicle the KordaMentha co-founder’s every utterance, step and gesture?

No doubt Korda would not betray a flicker of shock at being so questioned by a resurrected Banjo. As he told the assembled media throng after creditors had voted to accept CBS’s latest offer for TEN, “I’ve been in many contested situations so nothing surprises me”.

The desperation on display yesterday however can probably be attributed perhaps to two reasons. First, the second meeting of creditors was to be closed to media so from the start there were limits on the opportunities available to obtain a range of footage and sound recordings suitable for broadcasting. That had the audio-visual contingent in a lather from the start.

Second and more importantly, this was a case of the media reporting on its favourite subject – itself. No exertion in service of the cause of fair, accurate and objective reporting (cough cough) could not be justified. And so they swarmed about the key protagonists.

At one point during the meeting a poll was called. To conduct private discussions and count votes the administrators had access to a small glass -sided room 20 or so metres from the meeting room. To get there they had to run a gauntlet of pointed cameras, thrusted microphones, inquiring stares and probing, intelligent questions cunningly disguised as provocative taunts.

At one point joint administrators Jarrod Villani and Jenny Nettleton walked past SiN and Villani said: “You’d think they could’ve got us an easier room to get in and out of”? Actually, we’re very glad they didn’t.