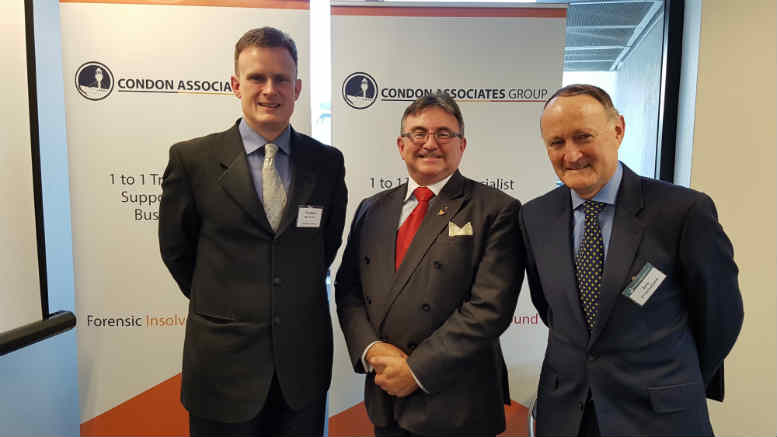 THE changes to insolvency mooted in the Federal Government’s Innovation Statement provide an ideal opportunity for insolvency practitioners to host seminars. There the invited can hear the pros and cons debated then opine at length during the drink and nibbles that invariably follow.

Last week Schon Condon, James McPherson and the rest of the Condon Associates team were at it, packing their conference room on Level 6, 87 Marsden Street Parramatta.

Guest speaker Stephen Mullette focussed on the proposal to reduce the default bankruptcy period from 36 months to 12. The Matthews Folbigg principal outlined how the idea has had previous incarnations and expressed ambivalence about its benefits.

Could a bankrupt acquire an informed appreciation of where they might have gone wrong in such a short time? Mullette wasn’t sure. Early discharge would not restore their credit rating any quicker. And a shorter term might incite high income earners, precipitating a wave of debtor’s petitions and diminishing the number of Personal Insolvency Agreements (PIAs) entered into.

Bankruptcy veteran Bob Cruickshanks then occupied the podium and took us back to a time when a bankrupt remained in that sorry state for life, unless they paid at least some of the debt or demonstrated to the court “compassionate grounds” sufficient to justify termination.

SiN is not suggesting Cruickshank has first hand knowledge of the regime prevailing before 1928 and Cruickshanks’ point, as he brought his listeners forward through the various changes over decades was to highlight the fact that in his experience, the average bankrupt is not likely to be that type of innovative, entrepreneurial spirit whom the government’s proposed reforms purport to unshackle.

Not to be outdone in any history lesson, Schon Condon regaled those assembled with an account of your average debtor in ancient Rome, when the law allowed anyone to discharge a debtors’ obligation. It also allowed the discharger to release the debtor from gaol, to be the discharger’s slave.

Again, a past regime was juxtaposed with the statement’s proposals to convey a somewhat skeptical view. Condon felt that removing bankruptcy’s pariah status would encourage more of it and that the ultimate cost would be born by the taxpayer.

He also said that tinkering with bankruptcy law would hardly unleash the growth the government was seeking when so much regulation that stifled risk taking was still in place. “Zero risk cannot generate profit” he said. But that’s a different history lesson.

Be the first to comment on "Innovation statement foments debate"