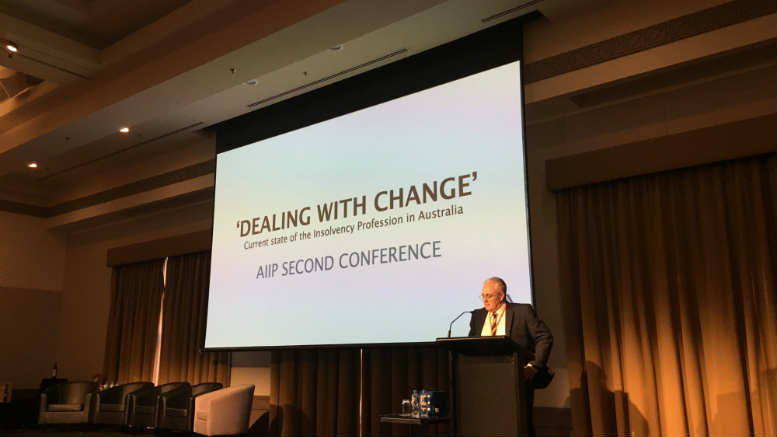 They came in droves to the Hyatt Hotel in Canberra, at least 170, most of them registered liquidators and trustees in bankruptcy and all prepared to hear insights, exchange experiences and assemble in a collegiate and congenial environment for AIIP 2019.

The conference – the second organised by the Association of Independent Insolvency Practitioners (AIIP) – was characterised by its theme – Dealing with Change – and many of the speakers brought novel and informed perspectives to the topic.

The judge, who in his youth worked as a copy boy in the offices of newspaper publisher John B Fairfax, insisted the profession will be best served if it sees itself as as agent for change.

An AIIP panel of registered liquidators and regulators talked about the types of change occurring.

Crouch Amirbeaggi’s Shabnam Amirbeaggi said she was concerned that increased regulation was having unwanted effects.

“The risk of non-compliance has shifted the mindset of the practitioner from performance to compliance,” she said.

dVT Group’s Mark Robinson said the profession needed to adapt to the internationalisation of business which is driving a need for networks offshore.

Jones Partners’ Michael Jones asked the conference if the increased focus on creditors facilitated by the Insolvency Law Reform Act 2016 and other reforms wasn’t undermining other priorities, arguing that in terms of personal insolvency, the focus should be on; 1) rehabilitation of the bankrupt; 2) equitable division of assets and; 3) ensuring justice is seen to be done.

The level of female representation in the insolvency profession was canvassed, with Amirbeaggi saying that while 49 per cent of accountants are women, a much smaller proportion ultimately chooses to practice insolvency.

“Do women even want to be insolvency practitioners?” she asked.

On the subject of directors lacking sufficient knowledge to understand their obligations and responsibilities moderator Michael Murray of Murray Legal said he was told by an unidentified staff member at the Australian Small Business and Family Enterprise Ombudsman (ASBFEO) that it was unreasonable to expect directors to bear some level of responsibility for their own level of understanding.

That brought a swift response from Jill Lawrence, ASBFEO’s Assistant Director, Advocacy who was in the audience.

“It’s not actually possible for an SME owner to get a lock down on all they need to know,” she said, adding that the ombudsman’s view was more nuanced and that directors, particularly those who were also owner/operators of small to medium enterprises (SMEs), could not be expected to be comfortably familiar with all their obligations given the extent of the burden being imposed upon them by increasing regulation.

Robinson said the AIIP should team up with the Australian Restructuring, Insolvency and Turnaround Association (ARITA) and the Turnaround Management Association (TMA) to lobby government on the issue of red tape and director education.

He was also enthused about the opportunities provided by information technology, artificial intelligence and outsourcing.

Mark Findlay, Director, Regulation and Enforcement at the Australian Financial Security Authority (AFSA) reinforced the need for cutting red tape, recounting how AFSA CEO Hamish McCormick had attempted to complete a Statement of Affairs as an experiment and had found it “a bit of an ordeal”.

The cost of insolvency was another hot topic. Amirbeaggi said she wants to see a dedicated insolvency court.

Robinson suggested a debtor-in-possession regime with an insolvency practitioner appointed to monitor it might offer a cheaper solution, adding that the profession, government, regulators and other stakeholders needed to acknowledge that “pre-packs are the way to go”.

Litigation funding was another topic scrutinised across the two days of AIIP 2019.

During Justice Lee’s talk one practitioner said creditors like FEG and the ATO were using their influence to pressure liquidators into appointing a specific litigation funder or firm of lawyers.

“I had not appreciated that this was an issue but it’s very concerning,” the judge said.

The judge also said he was highly critical of the independent expert process used in litigation and suggested that there was an opportunity for registered liquidators to be engaged by the courts to provide independent reports.

Another highlight of AIIP 2019 was the talk by former ATO deputy commissioner Michael Cranston and former head of the ATO’s Significant Debt Management division Aris Zarifiou.

Cranston said the Commissioner of Taxation’s (CoT) recovery strategy was to rely on liquidators to undertake the work in the majority of cases so there were opportunities for insolvency practitioners, including being assigned choses of action.

Zarifiou stressed the need for liquidators and trustees to be very clear in their communications if they are wanting the tax office to fund an action.

At the commencement of his Bankruptcy Update AFSA’s Mark Findlay told the conference 21 trustees had left the profession in the past two years.

He also said that while the regulator was utilising the ILRA 2016 to undertake more reviews of fees “in my 11 years AFSA has never had to go to court to challenge a trustee’s remuneration”.

In terms of AFSA’s Untrustworthy Advisors (UA) Program he said AFSA will be attending creditors meetings when it knows there has been the involvement of a UA.

In her place ASIC Special Counsel Kathleen Cuneo talked about the complaints and disciplinary process, provoking laughter when she assured her audience that complaints to ASIC about liquidators not honouring Dick Smith gift cards “are not the sort of thing we care about”.

On the topic of applicants for registration as a liquidator she told her audience that of the last 29 applications, seven had been refused.

Of those, four had appealed to the Administrative Appeals Tribunal (AAT) with appeal having been successful, two were withdrawn and a decision was pending on the fourth.

Some members of the audience questioned ARITA’s right to appoint one of the three panellists required under the disciplinary committee process, suggesting ASIC should appoint from a panel of potential committee candidates.

The cost of money – Carr said FEG’s was about 2 per cent – was also canvassed in the context of whether FEG or private money was best for unsecured creditors, while Ward talked about purchasing statutory claims, a market he said was sophisticated in the UK but undeveloped down under.

There’s no doubting that when liquidators and trustees are brought together in an environment where they can freely air their views, they do so. AIIP 2019 will be a tough act to follow in 2020. Please take a moment to support INO’s continued chronicling of the insolvency sector.